We are proud to release Feedreader version 3.09 today. You can download it from Feedreader download page. New features and additions : 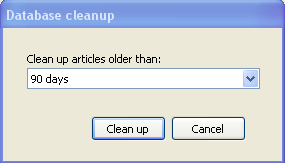 If you let application clean up older articles then ALL articles that are:

are deleted from database. If you are cleaning up a lot of articles then we suggest you also run Feedreaderbackup utility and let it optimize the database once.

This function synchronizes article read states and other article properties between multiple computers. Some additional information for use:

We finally added Favorite Icon support to Feedreader. We will not enabled it by default so you have to enable it from Advanced settings.

Save favorite articles to Archive

Added new feature "Move article to archive". This command detaches article from current feed and ads it to "My archive" feed. If you move important articles to "Archive" then they will not be deleted even if original feed is deleted.

Some users have requested the possiblity of changing Feedreader font (which is by default Tahoma). Now you can do it. Just add fontname=Verdana (or some other font) to feedreader.ini and you get Feedreader with Verdana font.

Newsbar is a region that's always visible even if Feedreader is hidden. You can show all feeds and smartfeeds in Newsbar. Just click on feed context menu and select "Show in newsbar". Newsbar is configured by pressing (v) button in Newsbar.

There is quite a lot of talk about information overhead. There's just so much information / articles / news that you cannot read through all of them. To overcome this problem a little bit we added experimental feature (we have no name yet) that tracks your interests and rates articles according to these interests. Basically Feedreader looks for articles that are either Starred or in your Archive folder and calculates articles that are important for you. Calculation is based on Article Title and Feed. After this you can sort articles by rating (new column is displayed in article list view) and Feedreader should show those articles first that could be important :). If you move your mouse to rating column then you can also see how rating is calculated for every article.

Of course we are still in beginning of this feature development so things will get better later. To test feature out add